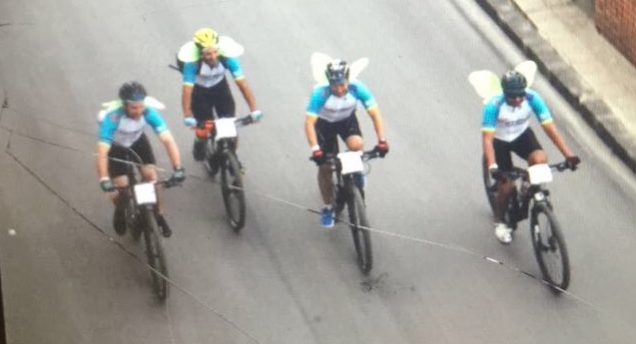 A few months ago at a Virgin Unite board meeting, I met Essie North, the co-director of ‘Big Change.’ Essie said I just had to join her in Italy for the STRIVE Challenge in September.

Ok, that sounded fun until I heard it would require swimming 2 miles, mountain biking for 70 miles, running a half marathon and then, just for good measure, hiking 6 more miles to a volcano summit.

I’ve never really done any of those activities beyond a few laps at the pool during adult swim or riding my bike when I was 15 years old before getting my driver’s license. And running? Sheesh – forget that. I stopped entertaining that silly idea after dry land training for hockey in college.

Then I got a nudge from Richard Branson asking if myself and few other Mavericks would like to participate. He was going to be doing the challenge alongside his kids and they were doing the full route starting at the top of Italy and finishing at Mt. Etna in Sicily. The triathlon portion of the Strive Challenge was set to start the day after my birthday so I decided to take this on as one of the biggest physical challenges I had ever set for myself. I decided I would do it for the growth that takes place when we exceed our perceived limits.

And in Richard’s infamous words, “Screw it – let’s do it!”

I didn’t quite know what I was in store for, but I accepted the challenge along with Mavericks, Tracey Ivanyshyn, Pat Divilly, Samit Gehlot and Tom Shieh. Tracey did the hiking portion of the challenge and the rest of us did the triathlon portion.
I knew this was outside of all of our comfort zones, whether it was for never having done a long swim before or never been hiking at altitude. (Samit has an awesome story about his swim training in Kenya and I know Tom was training at12am – 2am so he wouldn’t miss any time with the family!)

Here’s a pretty typical training week as we neared the event: 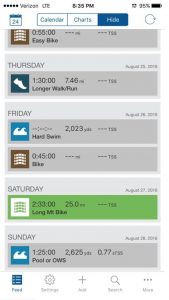 Keeping up with this during travels and trips made this an even bigger commitment. Big thank you to Maverick #211, Steve Young, who introduced all of us to Coach Jason Kilderry at Etacoach.com.  And huge thank you to my wife, Missy, for letting me go on my birthday, supporting all the long runs/bikes/swims, being my coach on the beach so I didn’t drown the first time in a wetsuit and for putting up with lots of extra laundry.

We all said that if exceeded our fundraising goal we’d come up with some sort of Maverick mischief for the challenge. I’m excited to report we raised over $15,000.00+ and still going. In fact, you can still donate here: http://uk.virginmoneygiving.com/maverick1000

All proceeds go to Big Change which is Sam and Holly Branson’s charity doing 3 big things:

Leading up to the event I was having a really hard time sleeping. Probably a combination of staying up late to get a lot of stuff done before leaving and the unknown of the event. I flew overnight to Heathrow and arrived in the UK on my birthday. I decided to spend the day in Avebury in the English countryside. It was the perfect place to recharge and meditate on what would was ahead. 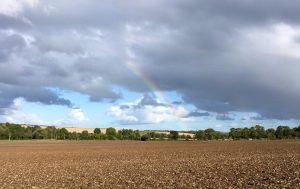 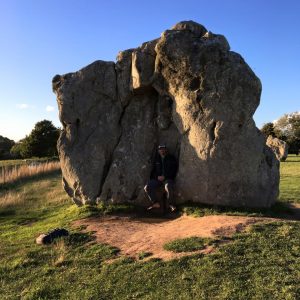 I couldn’t sleep at all the night before the Strive Challenge started. I had to wake up at 4:30AM to catch my flight to Italy but no matter what, I just tossed and turned. I finally got a few winks in and then my alarm went off. There were 7 of us late-comers on the final chartered flight. Everyone knew we’d go straight from the airport to the swim but we had no idea just how tight it would be. After we landed, we took a bus to the beach and then 10 minutes later we’re in the water.

The entire rest of the group was ready and had already started their swim. Our late group raced to get into our wetsuits and for the debrief and then we were off too. The current was quite a bit stronger than I had anticipated and made the first mile swimming feel a lot slower than typical. My goal for this whole challenge was to finish, put my best effort out there and to NOT be last.

Pretty quickly I realized I was last of that final group of 7 – and hence the whole group. Agh! I finally gave in and realized if I was last, I was last and it didn’t really matter except to my ego. It was a strong moment of surrendering. After that I just kept swimming and ended up passing a few swimmers before the halfway buoy and then a few more on the backside. Closing in on the final buoy was a great feeling and then being welcomed in by hugs from fellow Mavericks. A pretty fast welcome to day one and we were off.

To give you an idea of what we had in store for us here’s the topography for our ride:

Some pretty damn big hills including one that was 5 miles at a sharp incline. Yikes! I realized I hadn’t quite trained for enough hills. We started at the same beach we ended our swim at and took off on mountain bikes. This time I had props for the boys, green butterfly wings: 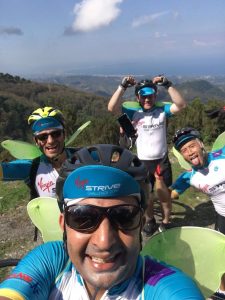 Our wings actually made it really convenient to stay together in a pack during our long, tough day. We started at 9am and ended thoroughly exhausted at 6:30pm. We rode 65km this day with a few breaks in-between, certainly my hardest bike ride ever. They kept saying there was a lunch but by the last checkpoint we realized that wasn’t happening. Samit said he’d love to have a kebob – we laughed and said we’d just manifest that. Well on the last stop, Tom’s bike needed to be repaired and while we were waiting a Sicilian man came strolling down the mountain. Our guides said he’s a little strange but not dangerous as he takes care of some of the animals here.

He sees a 2 liter Pepsi bottle on the table and told us he has Coca Cola. This man proceeds to whip out a 2 liter Coke bottle but with strange red liquid inside. We find out this is a homemade wine and then he pulls out homemade sausage and 2 loaves of bread. We all look at each other and pretty quickly decide those are the kebabs we asked for. It was perfect and delicious. Definitely a welcome change from the Clif blocks and gels we were eating all day. Then we found dessert too on the side of the road too with a few ripe prickly pear fruit we picked. Afterwards is was all downhill for the final descent to the finish line in butterfly formation: 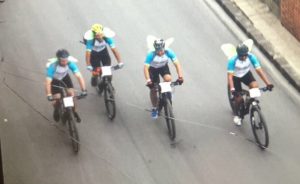 The organizers originally had an even more grueling day planned for everybody for the second mountain biking day but they reworked it after everyone had such a tough day one. The first part of the day two took us by the seaside and then into the mountain trails. It was pretty muddy and bit wet from the previous days so lots of splashing around. At one point we came across a small concrete bridge with moss over the top of it making it extremely dangerous and slippery. Tom & Samit both went down. Afterwards, Tom took it upon himself that we would all stay put to help ensure the next groups of riders made it across, including a pregnant ‘Baby on Board’ Striver. Truly going the extra mile as I try to teach my kids as one of our 13 Silver Keys.

The very last climb of the day took us into a small village and we realized we hadn’t had any gelato this trip. We told each other there would be gelato waiting for us at the top (hopefully). As our pack rode into town we asked a police officer for gelato and he said no. We asked another person on the road also she also said there wasn’t any gelato. Undaunted we went off the route and found a gelato shop. Perfect again! 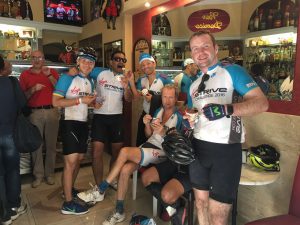 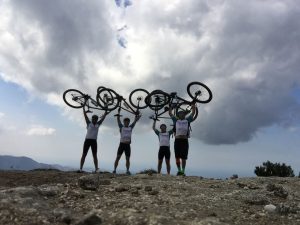 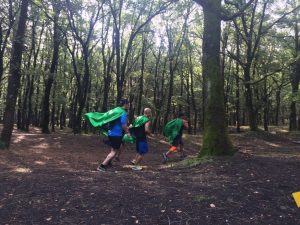 We started at the foothills of Mt. Etna and everyone took off for their trail run. Our plan was to do a 7 min run and 1 min walk – but pretty quickly realized there was a lot more incline and tough terrain then we had accounted for. Again all the Mavericks stayed together and helped push each other.

On the way up I was able to enjoy each moment as the woods actually smelled like Italian spices & herbs. And I picked some wild blueberries to eat on the way up that I wouldn’t have noticed if we were actually racing. In fact, our timing was perfect again as we caught up to Sam, Holly and Richard at one of the water stations. And then we ended up running the final leg together with Richard for an epic photo op with the Maverick caped crusaders: 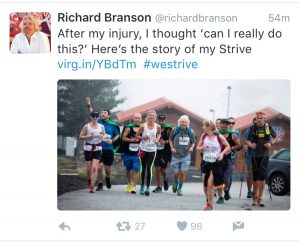 That was the midway point of the day and after lunch we set out for the final 9 miles up Mt. Etna to the summit.

I had started feeling a little bit of elevation and tiny bit lightheaded but I couldn’t stop here. I kept moving. One foot in front of the other, plodding up. At one point I turned on a few songs for a little dance party up the mountain. That winded me a bit more but it was so much fun! As we kept creeping up the mountain our cut-off time became a real issue. Our mountaineering guide finally said we would not reach the summit if we didn’t get a small ride from one of the buggies. I couldn’t believe it. We had come this far on human power and now we’d need to drive up a bit. It took me a minute to reset inside the buggy and realize I could continue to be frustrated and miss the rest of the amazing summit or let it go. It was like a small ‘piggyback’ a couple hundred meters up the mountain but enough to give us the time we needed to ascend the final 300m.

The summit was incredible.

You could actually feel the heat rising from being on top of an active volcano – and being above the clouds was unbelievable. I took a moment to meditate and lock in the feeling of this accomplishment and culmination of everything we had worked for.

And here we are at summit with the Kenyan flag in honor of our Maverick brother, Samit’s home country & celebrating Tom’s birthday in style: 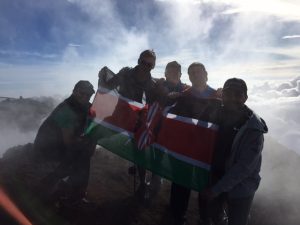 Surprisingly it all hit home in the shower when we got home. I literally thanked every part of my body, especially my knees. I’ve previously had 2 ACL tears but took the approach that every cell in my body had changed so I could do this.