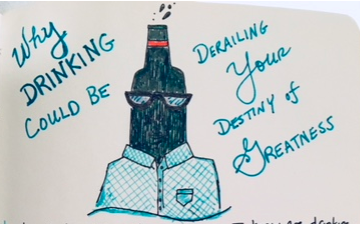 I feel like I’m going to get some grief for this, but it’s worth it.

First off, I’m not going to make an “always” or “never” statement here, but if this strikes a nerve or triggers an emotional response, there’s something here for you to examine.

Most highly talented entrepreneurs I know are drinking way too much to cover up for NOT doing their most important work here.

By drinking and partying, we don’t have to examine what our REAL purpose is or what our greatest expression of who we could become.

This really struck me when I took 33 days off from drinking a few summers ago.

I was drinking too much (at least for me) because I realized I hadn’t strung together more than two days concurrently without having a glass of wine, bourbon, beer, etc. It was never a lot, but it was enough that I couldn’t recall a long period of time spent not drinking.

No doubt, I had already cut back a bit on my hard-drinking days, but I wasn’t totally beyond it. And I noticed that at some events I attended or was a part of, the vibe was actually too much of a party. I used to love drunk conversations with smart friends, but I realized I was just fooling myself.

I was using alcohol to help me “loosen up.”

To help me socialize more. To assist me with getting my ideas flowing.

Or whatever excuse you want to use.

Frankly, drinking is just woven into so many social situations.

I get it. I play men’s league ice hockey, and after each game, we have beers in the locker room or parking lot. I meet up for drinks with friends. I have wine with dinner. I want something when I head to a restaurant, etc. The list goes on and on. But that’s not even the deeper issue. What I’ve seen is that some of the smartest and most talented individuals I know get hammered!

Perhaps it’s because we want to forget our “responsibilities” for a little while.

I’m not talking about responsibilities like putting the sheets in the dryer or taking out the recycling but more like our Destiny of Greatness and true Dharma. Yep, the BIG stuff!

So I did a little experiment…

I like 33 days for the length of time to experiment with because it’s a specific number, it forces you beyond just one month, and 33 has become quite symbolic for me in the last few years. (It actually shows up in some really synchronistic ways that are hard to explain as simply being coincidences. More on that another time.)

About 3 weeks in, I had “amnesia” about what date I said I’d stop. I knew the date, of course, but was considering if I had somehow miscalculated. Finally, at midnight on the final night, I was so excited to drink again that I grabbed a semi-cold hard cider and sat on my front steps.

Hmm…moving into an observer role here and realized I hadn’t really changed too much, but I was still proud for completing this experiment.

The next summer I tried again. This time after the 33 days, I did cut back on my drinking a bit. It eventually took one more 33-day period to really get this to stick and for me to develop a new practice. I’ve realized I can be much more mindful, intentional, and conscious about it. Previously, it was just habitual. Of course you have a glass of bourbon at 5 p.m. after back-to-back meetings because that’s what you do.

It’s fascinating watching your friends react in social situations. The big question is always “WHY?” I play ice hockey, so the boys never got it, but I stood my ground.

Now I’ve become more aware and exacting about when and what I’ll drink.

If I’m having a great meal, I might (or might not) want to pair up a good wine with it. Or if there’s a big celebration, like the BVI Art Reef sinking, I’ll have some champagne. On a recent trip to Necker, Richard wanted to do our signature shot. I had never actually done shots with him over the many years we’ve been together, so I figured this was a moment I wanted to share. (We have a special shot called the “BBG” on Necker that’s become a Maverick tradition.) 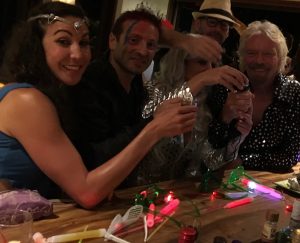 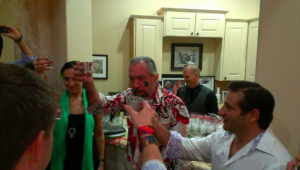 It’s interesting that the word “spirit” references both the alcohol and our inner essence.

I’ve  realized when I am aligned with my greatest purpose, I really, really want to be at my optimal so that I don’t miss any moments or subtle insights. Full awareness. Pay attention. For me, I definitely feel less intuitive for about 2 days after drinking. It’s subtle, but these subtle energies are where the greatest “downloads from the universe” come from like my Cosmic Journal.

Perhaps this is an experiment you want to take on?  (Let me know if you do.)